Why do dogs eat grass 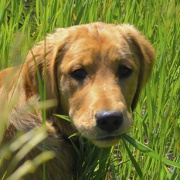 This canine phenomenon is not only a mystery to dog owners, but also to researchers. The fact is that 90% of all dogs eat grass on occasion.

The reasons for this behavior, however, have several explanations, such as:

However, which theories are true?

According to a recent study by SJ Bjoner at the University of New England in Australia of a total of 1399 dogs that ate grass only six dogs vomited afterwards. This is supported by numerous other studies in which researchers and veterinarians have been devoted to this topic. It can therefore be assumed that eating grass does not serve as an emetic in the dog.

Furthermore, it was obtained through extensive observations and tests that grass eating behaviour is found in both wolves and dogs it is assumed that this behavior has been preserved in spite of domestication of dogs. Thus, it is innate, with the eating habits of the mother dog reinforcing the eating habits of her puppy.

Particularly striking was that regardless of weather and completely independant of race, young plants, grasses and corn plants were preferred. If your dog eats alot of grass, please take special care with poisonous plants such as ivy, vine tomatoes, rhubarb, onions, boxwood, jasmine, wisteria, laburnum, clematis, oleander and daffodils!

This theory is also extremely persistent, but was refuted in the above mentioned studies, as it would require in this case, a regular intake of grass. Most dogs only eat grass on a very irregular basis, so the theory of vitamin deficiency could not be corroborated. Moreover, even dogs eating a balanced diet ate grass and the intake was too low to balance any deficiency.

As previously stated, the wild relatives of our dogs such as wolves, coyotes and jackals are in fact not purely carnivores. Depending on the environment in which they are found they most probably also enjoy a vegetable diet.

In conclusion, it seems that dogs eat grass as a relic of species-specific dietary patterns, which appear to us humans very strange, because we often see the dog as a pure carnivore.